So, did you get something nice in your stocking?

My sweetie and I spent the weekend with my family about an hour away. (Well, I stayed there and she drove back up to work overnighters at her second job. After her recent bike-car accident and missed shifts, we can't really afford to turn down holiday pay.) We all had two massive dinners (Christmas Eve and Christmas Day) and opened a TON of presents -- I thought this was going to be a small Christmas, but with my sister out of the country and away for the first year ever, it seems like some of her gifts found their way into my pile.

-FitBit fitness tracker that doubles as a pedometer and a sleep monitor
Along with the usual goal of 10,000 steps/day, I can keep an eye on how long it takes me to fall asleep and how many times I waken. This info is wirelessly transmitted to my computer and updates my FitBit account, so I have records of my sleep and activity.

-Laptop Lunchbox Bento 2.0 system
This purple beauty will promote bringing lunches to work during the week instead of buying food. It includes a drink bottle and silverware as well as a space for a chillpack if necessary (I usually park my lunchbox in the office fridge).

-Scrabble Slam
Santa produced this card game, which combines my love of words and -- I THOUGHT -- my competitive spirit, as it was packaged using words like "slam" and "slap". I figured it would be like slapjack, and I'd get to hit people if I were quick. No such thing, I found out. But it's still a fun game.

I got super-excited about a set of Eggies that my sweetie got for me (so she doesn't have to peel soft-boiled eggs when my Vitamin D-deficient demands for them come in rapid succession), and she was equally enthusiastic about a set of magnetic spice containers that I got her. I also received a gift certificate for a scrub and massage at a local Korean spa I frequent -- or try to, when I have the time and the funds -- and a gift card from Pasta Pomodoro for a dinner out with my sweetie. From my godmother, a woman more frugal than I can ever aspire to be, I got a calendar from 1984 (the year I was born) that can also be used in 2012 and 2040! 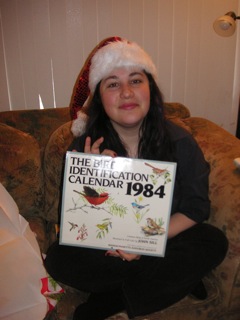 My biggest present was a George Foreman grill, which came with the insinuation that even I could cook with it. I used to have a similar countertop model from Hamilton Beach, and I agree that cooking meat (like chicken breasts or steaks) is very simple. It also uses less energy than heating the whole oven, so that's a bonus! (I paid the utility bill today, and our PG&E bill for the November-December cycle was $22.91, the highest of the year. Looking for ways to reduce it further with three people in the apartment is a little tough.)

My sweetie received (among other gifts) a set of porcelain rice bowls with chopsticks and some brightly-colored nesting mixing bowls from my parents, which revved her engine. (The woman cooks for both of us and anyone else in smelling distance, so good kitchen supplies are important.) From her Secret Santa (the larger family does a gift exchange draw instead of buying presents for everyone), she got gel-fiber pillows from our wedding registry. Those suckers are made from a down alternative and are also hypo-allergenic, which is important in a dust- and dander-heavy zone. Her favorite present was a surprise from me... while I'd told her more than once that a Kindle Fire was out of our price range this year, and please not to get her hopes up, I then ran across an Android tablet on Amazon's Black Friday sale. It's a color e-reader, but it also has web browser access and email and Facebook and an office suite, and it plays music and video (and it will play Flash videos after she makes some modifications). I managed to scoop it up for less than half the cost of a new first-generation Kindle. So I didn't break my budget at all, but still got her a nice new toy and tool for work. And I managed to keep it a secret until she opened it. I win at Christmas!

While opening up presents on Christmas morning, we Skyped with my little sister, who was visiting grad school friends in Norway and suffering power outages from the winter weather. She got me librarian-themed stuff from Bodleian Library at Oxford University. I have her presents wrapped, but won't mail them until the new year, when she'll be around to receive them. After brunch at home with my 90-year-old grandmother, my sweetie caught a nap while my mother and I joined up with a friend of hers for a Christmas walk. The weather was fine -- I went out with only a T-shirt and jeans. The joys of Christmas in California!

Although I did wind up with quite a few gifts from family members (which I wasn't expecting), I also got a lot of pleasure out of selecting gifts that would be used and appreciated, and in presenting them wrapped in brown paper with homemade snowflakes or in reused bags and tissue paper from previous years (my favorite aunt, in particular, uses excellent ribbon!). It was just a bonus that I completed my shopping before December (except for one gift card that was ordered on Thanksgiving but hasn't made its way through the post yet... my poor Secret Santa recipient will have to wait a little longer). It was nice to have some time with the family, and to overindulge in cookies my little cousin had decorated, and to take home the turkey carcass -- which is being made into turkey barley soup at the moment. I go back to work tomorrow (all by myself in the office, as everyone else gets the whole week off), but with school out and the holiday visiting over, we'll have time to put the apartment in order and get Xmas supplies back to storage so we'll be ready for 2012!

Please be civil to other commenters.

Remy
Oakland, CA, United States
I earned my Master's degree in Library and Information Science (MLIS) from the School of Information at San Jose State (SJSU). My dream is to work for a local public library, maintain a household with my wife and child(ren), and steward a Little Free Library with an emphasis on bilingual children's books. (3 for 4 so far.)