There aren't a lot of loyalty programs that I participate in. In most cases, you'd need to be a heavier consumer of X brand or of stuff in general than I am in order to benefit from the points or other rewards. I have one that I stick with, though, because it's worth it to me. It's the JetBlue TrueBlue program -- and I am almost to my goal of 20,000 TrueBlue points for our honeymoon flights!


Back when my sweetie and I were conducting a long-distance romance, I flew fairly regularly on JetBlue from SFO (San Francisco) to LGB (Long Beach) and back. The flight itself isn't much more than an hour, and the airport hassle was minimal -- especially on the Long Beach side, where you walk out of the plane onto the tarmac at the tiny airport, and retrieve your baggage from the single (outdoor!) carousel. The prices were also reasonable, which is always the major factor for me. Sometimes I took longer flights cross-country to visit a friend in Florida (JetBlue flies to PBI and FLL). I got into the routine easily, and I figured that if I was spending so much time and money on air travel, I really should take advantage of the rewards the airline offered. JetBlue generally values one-way flights (of various distances) at 5,000 TrueBlue points each. You can pay for your entire trip with points, or use the points you already have and pay cash for the difference. So I tucked away my 300 points per flight and occasionally used them to discount the ticket prices to Southern California or Palm Beach even further.

And then I was offered a credit card application for the JetBlue American Express card. I applied because I could earn points from purchases made with the card. This was the last attempt I planned to make before opening a secured credit card to build my credit -- I had been turned down before not for bad credit behavior, but for my lack of a credit history. But AMEX decided I was credit-worthy and issued me my first card! So then I started racking up points for the purchases I would have made anyway (including extra points for purchases of JetBlue tickets booked at jetblue.com!).

But when my annual billing period was up and I was set to renew it, I asked American Express if they'd waive the $40 annual fee. I didn't think it was smart to pay for the privilege of having a credit card, when I paid off my balance in full each month and never paid interest to the company. The supervisor I spoke to on the phone said that it was against policy to waive the fee, so I asked to close the account. He transferred me to someone in the account retention department, who halfheartedly tried to change my mind with the offer of a few extra TrueBlue points (not enough to offset the annual fee). I had earned a whole bunch of TrueBlue points by then, and had in my hand an offer from Chase for their Freedom card -- no annual fee and $200 cash-back rewards after spending $500 in the first 3 months. AMEX was unable to match that and unwilling to accommodate me, so I bid farewell to my JetBlue credit card.

However, that didn't mean I had to stop using TrueBlue points! I found other ways to earn them -- for example, through the ShopTrue online store, which offers deals with JetBlue's partners. I signed up for Netflix (something I'd long resisted) because for $7.99, I got 2 months of movies and TV (first month free) plus 1500 TrueBlue points! And I also started answering surveys for eRewards, which assigns a dollar value to each completed survey (and usually 50 cents if you fail to qualify for the full survey). Once you get to $25.00 in eRewards, you can exchange that for 500 TrueBlue points or a bunch of other rewards. Plus I got 350 points just for signing up! Here's what my TrueBlue activity log looks like now (click for a larger version): 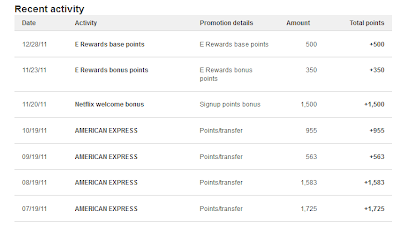 It took me about a month to earn my first $25.00, answering 3 or 4 surveys a week, and I just earned my second reward today -- that's about 6 weeks, but with fewer survey opportunities offered. It takes some time (the website says 6-8 weeks, but it took only about a week for me last time) to receive the credit in my TrueBlue account. For a few minutes of work, giving my opinion about subjects like health insurance, financial services, and radio stations, I'm racking up points toward my (and my sweetie's) flights to and from Long Beach this fall. Check out the blue thermometer to see how close we're getting!

Soon it'll be at 20,000 -- and I won't pay for anything but a few taxes when we head to Knott's Berry Farm on our honeymoon. That's a reward that's worth it to me.

Please be civil to other commenters.

Remy
Oakland, CA, United States
I earned my Master's degree in Library and Information Science (MLIS) from the School of Information at San Jose State (SJSU). My dream is to work for a local public library, maintain a household with my wife and child(ren), and steward a Little Free Library with an emphasis on bilingual children's books. (3 for 4 so far.)